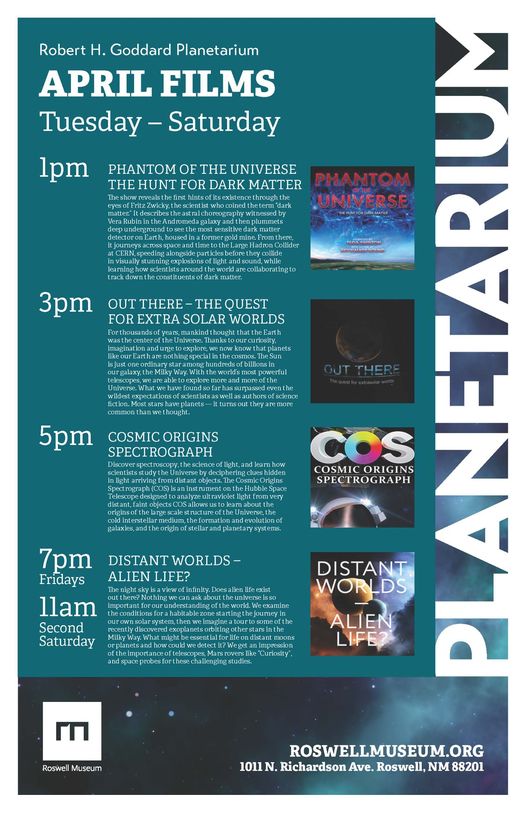 Phantom of the Universe – The Hunt for Dark Matter

Phantom of the Universe showcases an exciting exploration of dark matter, from the Big Bang to its anticipated discovery at the Large Hadron Collider. The show reveals the first hints of its existence through the eyes of Fritz Zwicky, the scientist who coined the term “dark matter.” It describes the astral choreography witnessed by Vera Rubin in the Andromeda galaxy and then plummets deep underground to see the most sensitive dark matter detector on Earth, housed in a former gold mine. From there, it journeys across space and time to the Large Hadron Collider at CERN, speeding alongside particles before they collide in visually stunning explosions of light and sound, while learning how scientists around the world are collaborating to track down the constituents of dark matter.

Out There – The Quest for Extra Solar Worlds

For thousands of years, mankind thought that the Earth was the center of the Universe. Thanks to our curiosity, imagination and urge to explore, we now know that planets like our Earth are nothing special in the cosmos. The Sun is just one ordinary star among hundreds of billions in our galaxy, the Milky Way. With the world’s most powerful telescopes, we are able to explore more and more of the Universe. What we have found so far has surpassed even the wildest expectations of scientists as well as authors of science fiction. Most stars have planets — it turns out they are more common than we thought. A huge diversity of different worlds is out there, just waiting to be discovered.

Discover spectroscopy, the science of light, and learn how scientists study the Universe by deciphering clues hidden in light arriving from distant objects. The Cosmic Origins Spectrograph (COS) is an instrument on the Hubble Space Telescope designed to analyze ultraviolet light from very distant, faint objects. COS allows us to learn about the origins of the large scale structure of the Universe, the cold interstellar medium, the formation and evolution of galaxies, and the origin of stellar and planetary systems.

The night sky is a view of infinity. Does alien life exist out there? Nothing we can ask about the universe is so important for our understanding of the world. We examine the conditions for a habitable zone starting the journey in our own solar system, then we imagine a tour to some of the recently discovered exoplanets orbiting other stars in the Milky Way. What might be essential for life on distant moons or planets and how could we detect it? We get an impression of the importance of telescopes, Mars rovers like “Curiosity”, and space probes for these challenging studies